Following our look at what was delivered in 2018 on Kingston’s Mini-Holland or ‘GoCycle’ schemes, lots more should be happening in 2019.

This will be the first new scheme to kick off in 2019 with preparation work due to start later this month. A 2-way cycle track will be added along most of Penrhyn Road and at one end will link to the new Wheatfield Way scheme and at the other to Surbiton Crescent joining up to the new Surbiton cycle ‘links’. When all the Mini-Holland projects are complete, Penrhyn Road will be the middle section of a route which will stretch from Tolworth to Kingston station on upgraded and much safer roads than before work started. 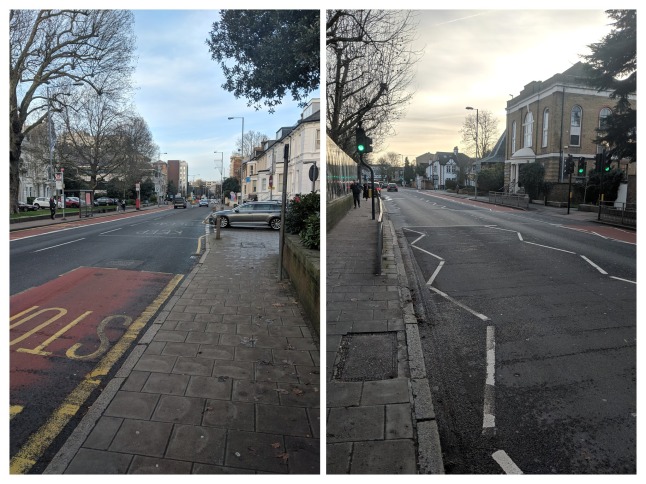 Current state of Penrhyn Road. A 2-way cycle track will be added on the university side of the road during 2019.

This new cycle and pedestrian link should be completed in 2019 having started in Summer 2018.

This new link will join Raynes Park and New Malden and will be completely off road for the part in Kingston borough. With ‘The Cut’ linking directly to this new route by crossing Coombe Road, it will effectively be a c.2km off-road route from Elm Road in New Malden through to Taunton Avenue in Raynes Park providing a safer and attractive route for both cyclists and pedestrians.

Construction work will soon commence on one of the final stages of the Wheatfield Way scheme between Orchard Road and Brook Street junctions. However, one of the first parts of the Wheatfield Way scheme (near the Rotunda and Pryzm nightclub) has still not been finished despite being constructed in late 2017! A crossing over a delivery access point still needs to be completed and a street light and sign have been left in the middle of the cycle track – we have asked for this to be sorted soon.

Despite our concerns about the amount of shared use areas on this route, it will still provide a completely new North-South cycle link through Kingston when it is completed in 2019. 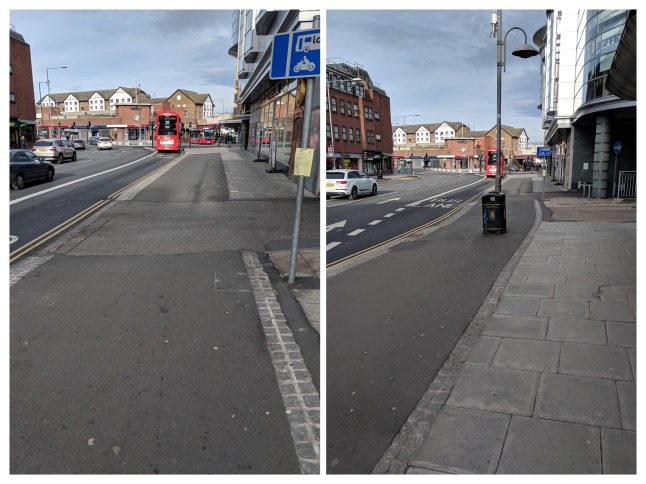 Unfinished works near the Rotunda on the Wheatfield Way scheme. A crossing needs completing and a lamppost (and bin) needs moving!

The Surbiton to Tolworth scheme along Ewell Road was approved by Kingston Council’s Environment and Sustainable Transport committee towards the end of 2018. This will mean that work on detailed design can start in early 2019 and, subject to TfL funding, could potentially start construction in the second half of the year.

Now the main works have been finished directly in front of the station (although some snagging works still remain…), the focus of construction on this project is moving to the ‘green link’ which will link the station plaza with the Skerne Road underpass by going over a new bridge that should be installed during the Spring. This replaces the narrow shared use bridge which was removed during 2018. Further works should provide easier cycle access from the station to Kingston Bridge with the crossing over Horse Fair near TK Maxx and John Lewis due to be replaced too.

A cycle hub with lots of space for cycle parking is due to be built next to Kingston Station but the timings for construction are currently unconfirmed.

Work will continue in 2019 on the Kingston Vale scheme having started in 2018 near Derwent Avenue with construction progressing on one side of the road (up the hill) towards Kingston Hill university campus. The one way segregated track up the hill to the university campus is now basically complete with works now continuing past the campus itself. Works are not due to finish on the Kingston Hill route until 2020 with some signalised junctions closer to Kingston town centre likely to take some time to reconstruct.

Works have also taken place to renew two crossings at Cotswold Close and Magnolia Close. These appear to be attempts at ‘continuous crossings‘ but we have some concerns with what has been constructed and will be speaking to the Council about the details of what has been built.

Very recent markings added to the pavement near Manorgate Roundabout suggest that construction work may soon reach here before too long where parallel pedestrian and cycling crossings will be added to each of the five arms of the junction. 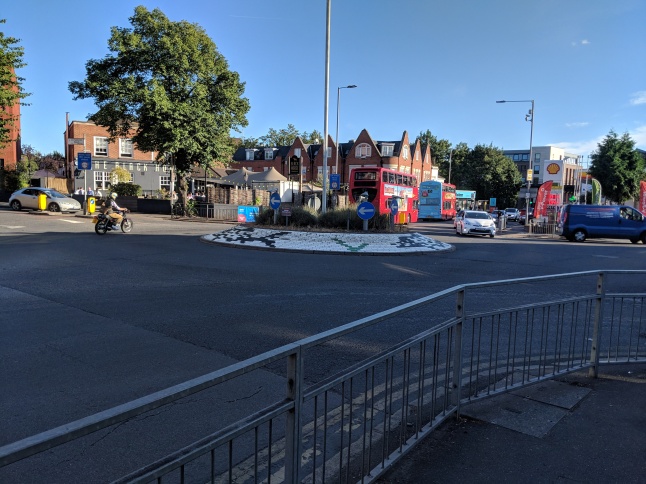 Five different roads converging at Manorgate roundabout. Parallel cycle and pedestrian crossings will be added on each arm of the junction as part of the Kingston Vale scheme.

A new cycle network is finally starting to emerge in Kingston and 2019 will be the first time that a number of different Mini-Holland schemes join up. However, the new network will only be successful if it is completed to a high standard. Kingston Cycling Campaign will therefore continue to work with and ask the Council to deliver schemes to the highest possible standard ensuring the safety and usability of these routes for those on bikes and also those walking is prioritised.

As always, let us know if you have any comments about any of the schemes.