Following our update earlier this year on Kingston Go Cycle schemes, what has happened over the past few months?

The biggest milestone passed in the past few months has been the opening of the off-road New Malden to Raynes Park cycle and walking paths on 13 July 2019. We are delighted with the opening of this route and are very pleased that our campaign to get separate cycle and walking paths (rather than a shared path) was successful. You can find further information on the route in our post marking the opening of this new link. We’ve already noticed how popular this new route is and we look forward to it being enjoyed by the community for many years to come.

Most work has now been completed on Wheatfield Way with it being declared officially open in the past couple of months. This was the 4th Go Cycle route to be finished (New Malden to Raynes Park is the 5th) and we have been pleased to see line markings being added to the segregated cycle tracks to make these areas much easier to identify. We will also be asking the Council to look at improving the wayfinding on this route to better guide people on bikes through the five junctions the route passes through along the way. 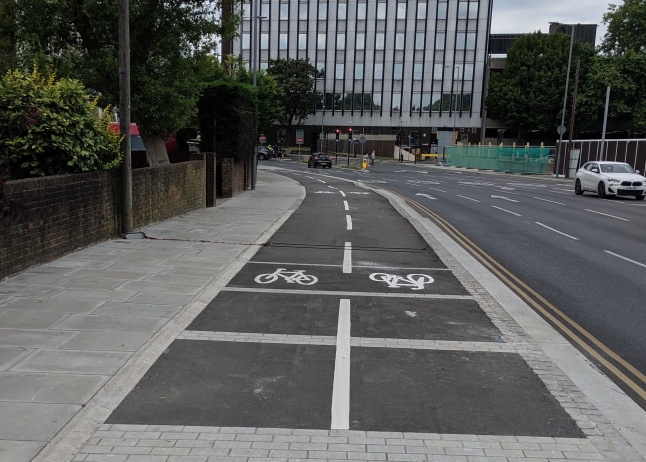 Work has been continuing at some speed along Penrhyn Road which is the Go Cycle route connecting Wheatfield Way to the Surbiton ‘links’. When the Penrhyn Road scheme is finished it will link Kingston Station to (almost!) Surbiton Station. We were pleased to see that the Council has been listening to ours (and others) feedback and has reduced the amount of shared use areas along the route although some will still remain where space is constrained. We will continue to ask the Council to look at all possible ways to reduce shared use on remaining Go Cycle routes. We also continue to speak to the Council about how they plan to address the missing link between St Marks Hill and The Crescent (i.e. between Surbiton station and Waitrose).

This is the longest Go Cycle project which will go all the way from Old London Road (next to Wilko’s) to the Robin Hood Junction on the A3 linking a number of key destinations  (Kingston Town Centre; Kingston Hospital; Kingston University campus (Kingston Hill); Richmond Park).

Most of the work between Galsworthy Road junction and Derwent Avenue on the route is now complete with some final snagging work underway (including picking up some points that we wanted improved) as well as workers putting the finishing touches to five new zebra crossings on the route. We have been impressed with the short amount of time taken to install a new type of segregation kerb on Kingston Hill. At less than a tenth the cost of stepped cycle tracks, these bolt-in kerbs make cycle segregation possible in many places where costs would otherwise be prohibitive. 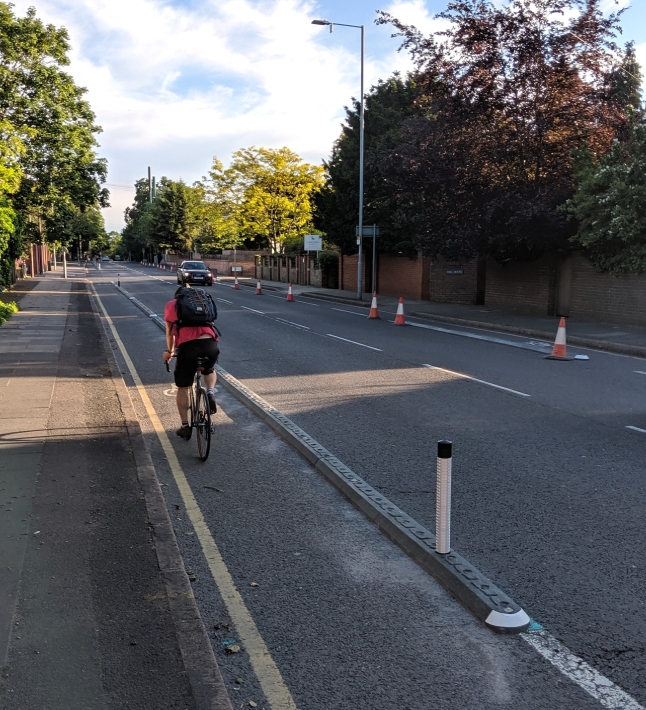 Work has almost been completed at Manorgate roundabout where five new shared crossings have been installed though signage is yet to be installed. Over the Summer holidays, construction focussed near Tiffin School upgrading the crossing from Old London Road to a new 2-way segregated cycle track which will run along London Road to Manorgate roundabout.

On the weekend of 23/24 March, the new pedestrian and cycle bridge was installed. This 4m wide bridge replaces a narrow 1.8m shared use bridge previously in place. Works around Kingston Station since March have focussed on building the paths each side of the new bridge to link Kingston Station to the Thames as well as Ham & Richmond via Skerne Road and Lower Ham Road. 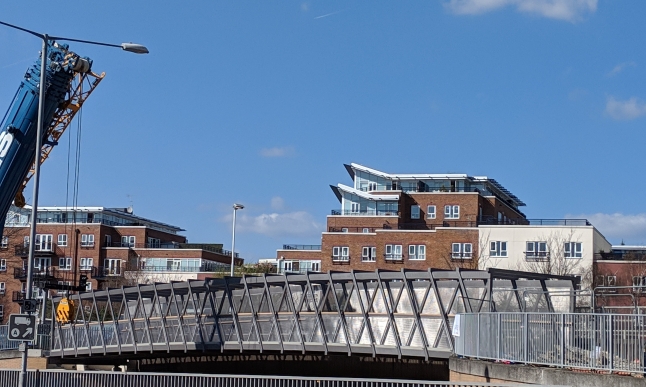 Preparatory works have also started for the new cycle storage hub next to Kingston Station. We are in discussions with the Council about how this cycle hub will be managed when it opens (due to be some time in 2020).

Work will also continue into next year on the Kingston Station and Kingston Vale schemes. We also expect to see further progress announced on the Kingston to New Malden scheme along Kingston and Cambridge Roads which currently feature narrow advisory cycle lanes and which have unfortunately been the location of many collisions involving cyclists and other vehicles.